A sport that involves guns and shooting at each other, it is only natural to ask does airsoft hurt? And what it’s like to get injured in playing airsoft?

Let me tell you this, the airsoft is not-so-soft, it can hurt. But the intensity of pain is dependent on many factors that we will be discussing later in this post.

Getting hit would normally feel like a sting but that also can be avoided by wearing proper safety gear.

It’s both Yes and No, it depends on many factors such as FPS of the gun, BB’s weight, distance from the shooter, clothing you are wearing, etc. So, it gives you pain but it’s subjective and depending on so many factors that we will discuss below.

How does it feel to get hit by an Airsoft Gun?

Usually, the skin areas which are not protected by muscle tissues will hurt the most if get hit by a BB there. For example the cartilage area in the ear, neck, fingers, ribs, or crotch area, etc.

You must wear proper goggles and mouth protection at any cost as it can seriously damage your eye and even can blind you, as well as a high powered airsoft rifle shot can chip your teeth.

Does it damage your skin?

It may or may not break the skin, here’s why?

If it is being shot from a gun having more than 350 FPS velocity and hits your mild skin area, then it’s probably going to leave an open wound but it wouldn’t be a severe one and the bleeding should stop pretty quickly without needing any bandages or other sort of medical attention.

On the other hand, if a powerful bolt action sniper rifle having around 450 – 500 FPS power along with copper-coated or even metal BBs are used then it’s probably going to pierce your skin and may even cause bone damage.

Here’s a rough comparison of FPS with pain that can cause without wearing any protective gear.

Note that a BB shot with a 300 FPS gun can break your skin if you aren’t wearing any protective gear or combat suits.

What makes it painful?

Following are the factors that cause pain in airsoft are:

On average, airsoft guns shoot at 200 to 400 feet per second (FPS) which means that the BBs travel with that velocity. So if a gun’s FPS is more, the BBs will travel faster and the more it will sting.

Like every other gun, airsoft weapons also have specific ranges and the BBs effectively reach only till that range. So if you get shot point-blank or within the range, you might bleed while the shots from a distance might not even sting.

Clothing matters the most

The type of clothes you are wearing matters the most. If you are wearing a proper combat suit with other necessary gear like gloves, armor, ear protection then even short distanced shots won’t give you any pain. While it’s definitely going to sting and leave a bump on bare skin.

So along with the compulsory material like face mask or goggle etc. other optional gear like ear, hand and groin protection, vest and helmet are also recommended.

The pain from a BB hit also depends on where it lands on your body. Some areas with no fat or muscle tissues would definitely hurt more. Those areas include crotch, neck, ribs, inside of ear, arm, or legs.

It’s better to be safe than sorry!

The higher the weight, the more impact it will create.

For Example, An airsoft sniper fires a 0.2g BB at 400 FPS which hits at 1.5 joules…while with the same FPS, a 0.3g BB will hit at 2.2 joules. It’s a dangerous figure for the kinetic energy of a BB which isn’t allowed on airsoft fields.

How to reduce or avoid pain?

A sport should be fun, but if it’s causing you pain then you should think of countermeasures. Why would someone want to go through the pain and be at work or school with having bruises or chipped tooth if there’s a possible solution? 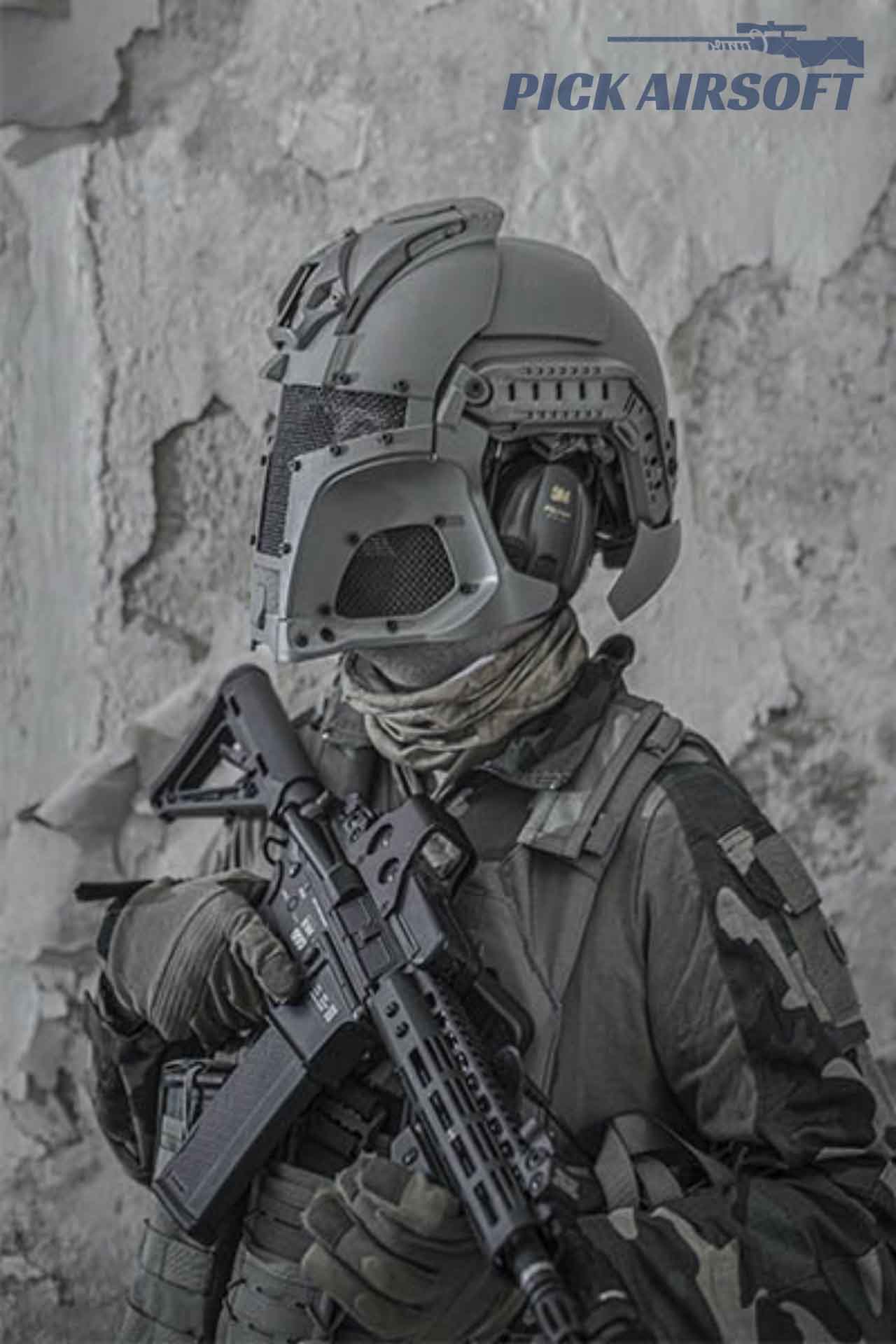 You must invest in protective gear to reduce the pain to a minimum. By wearing a proper airsoft helmet, goggles, gloves, full facemask, ear protection, neck guard, body armor, boots, and any other safety equipment that can make you more comfortable on the battlefield.

Now being a responsible airsoft player doesn’t mean it would reduce the pain, BUT it surely will save your opponent players a lot of pain and even injuries. Here’s what a good and responsible player should do:

What is the “Bang Rule”?

Not hurting opponent players who are in close proximity.

Whenever you encounter any enemy who’s close enough that shooting at him will be painful, i.e within 10 feet or under 4 meters then you point your gun at him and say “Bang!, Bang!” meaning that “you have been engaged and killed”.

Your gun must be pointed at him/her when using the bang rule otherwise it wouldn’t be applicable if you use your hand or a stick etc.

Can airsoft guns be fatal or cause serious injuries? Well, the airsoft guns may look like real guns but they are replicas with the most body made of plastic and it uses plastic BBs (Ball Bearings).

Generally, the most powerful airsoft guns could fire at around 700 FPS but that is not commonly used neither available, even the sniper gun would fire at 400 – 500 FPS because of airsoft fields FPS control rules.

Can airsoft guns kill? Hell NO! In worst scenarios, it could break your skin, damage your teeth, affect your bones, or even blind you but it cannot kill you.

And with taking proper safety measures like wearing a combat suit, vest, helmet, and goggles, etc. then you shouldn’t even worry about the pain.

Most people confuse airsoft with BB guns, which uses steel or lead BBs instead of plastic ones and shoots with much higher FPS (around 1200+). So, they are far dangerous than airsoft, they aren’t allowed to use in a sport where you can shoot humans with it. Make sure you know what you are buying especially if you prefer online shopping.

FAQs regarding “Does Airsoft hurt?” & “Can airsoft guns kill?”

Does airsoft or paintball hurt more?
Both the paintball and airsoft guns fire at almost the same velocity i.e 300 FPS (Airsoft snipers can fire at up to 500 FPS), but the size of paintballs is about 3x that of airsoft BBs, and their weight is about 15 times more than that of BBs (3.0g vs 0.2g). So, the paintball hurts more than airsoft.
Does airsoft hurt with armor?
With wearing body armor, normal airsoft guns wouldn’t hurt you much, it would be something like being flicked really hard and might leave a welt. But it depends on so many factors like FPS of the gun, distance, the area where it hits, and BB’s weight, etc.
Can Airsoft guns be used for self-defense?
Airsoft guns are perfect replicas of real guns and could be used as a good alternative if you don’t want to get in deep trouble with police and courts for using a real gun.

While they don’t have the power of a real gun but still it can be used for effective defense. The only thing you should be worried about is where the attacker has a real gun, that way he would be able to overpower you.

Can airsoft guns kill cats?
No, you can’t kill a cat with airsoft guns but you could end up maiming it or permanently blinding it if you hit it in the eye.
Can you open carry airsoft guns?
Carrying an airsoft gun openly in the public is never encouraged, keep it in a bag or case if you have to carry it through public places. The airsoft gun laws vary from state to state in the US. It is also required by law to keep at least a 6mm wide orange tip attached.
Will Airsoft kill a rat?
Shooting a rat with an airsoft gun is not recommended and it’s heavily frowned upon. You might end up torturing the poor thing. So it’s better to use traps or call an exterminator if you are good on budget.

We hope that now you would have a good idea about “Does airsoft hurt?” or “Does airsoft guns kill?” What factors cause the pain and how to minimize the pain by wearing all the necessary protective gear.

Playing airsoft can be stingy and causing welts, but that shouldn’t stop you from having the fun you deserve. And with the bruises and welts, you would have good stories to tell and make a good place in your team.

Was this article helpful? If so, then please share it with your airsoft buddies

A Navy Seal veteran who has served multiple international tours to Somalia, Iraq, Syria, and Afghanistan. He is also an airsoft enthusiast who enjoys playing, sharing his knowledge and expertise of the vast airsoft realm.