Airsoft vs BB gun? Wait, there’s a difference? A lot of us initially think that both of these terms are used for the same thing; “Airsoft gun” right? We all have been there.

In this post, I am going to explain the major differences which airsoft has from bb guns. Such as the type of ammunition they use, the environment they can be used in, which ones are more powerful, and which one’s accurate…and more.

I know you are not interested in having a history class right now but bear with me a little coz it’s important to understand the fundamental difference.

The airsoft guns were invented in Japan in 1970s by the gun enthusiasts to enjoy shooting guns regardless of Japan’s strict gun control laws. It was originally trademarked as “soft air gun” pointing towards the “green gas” being used as a propellant to fire the gun.

Initially, airsoft guns were used for target shooting practices but it was later discovered that it doesn’t cause any significant injury to humans as well. That’s where the story of airsoft war games begins.

Airsoft guns were designed to look exactly like real-world steel arms and they got their popularity in UK during the late 1980s.

The first BB gun came into existence in 1886, it is believed to be made by George W. Sage out of maple wood and a very little amount of metal. It was actually a spring-based wooden air pistol used for the training of young people.

The creator simply chose to go with the most commonly used shotgun pellets of that time which were 0.18 inches in diameter.

After the mass production started by Daisy Manufacturing in 1888, those improved metal air guns became a very popular household item due to their successful marketing campaigns.

Airsoft vs BB gun – The differences 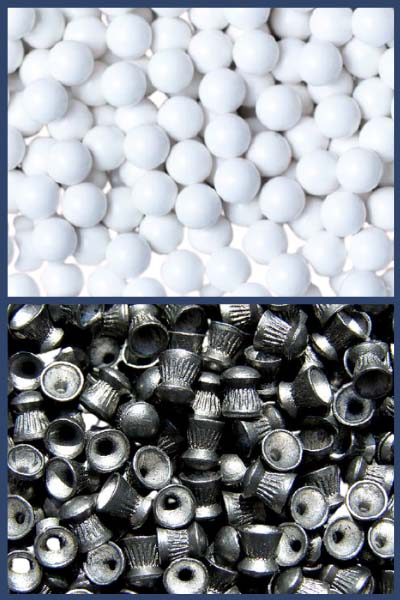 One of the major differences between airsoft and BB guns is the ammunition they use. Airsoft guns fire plastic projectiles of 6mm diameter which is used for recreational and sportive purposes, while BB guns use steel or lead BBs of about 3mm diameter; powerful guns, small but heavier BBs make it a dangerous gun which could even cause death.

Both types of this ammunition are called BBs (Ball bearing) and I am sure you would clearly know the difference by now that one is plastic made while the other type is made of steel or lead.

Airsoft guns are mainly used for playing the airsoft sport where the players try to eliminate opponent players out of the game (just like in the online video games). It’s also used for target practice and training purposes mainly by the military units and SWAT teams.

Major uses of BB guns are training and shooting practice, and small game hunting. Hunters even get a plus point for making less to no firing sound at all in doing big game hunting with powerful air guns.

Airsoft guns look almost exactly like the real world guns which make it really hard to differentiate. That’s where the orange tip comes in. According to US Federal laws, it’s required to have an orange marking on any airsoft weapon imported into the US.

On the contrary, bb guns don’t have any such requirement because it didn’t have much similarity with the real guns at first. But recently the manufacturers are trying to make it look more realistic in order to drive more sales. Modern air guns have now adopted the design of bolt action rifles.

Airsoft guns have more plastic as it doesn’t require much force to project fires plastic pellets while the BB guns which use steel or lead rounds; require more force and thus their body has more metal. The plastic can be only seen as the sight or around the stock of a bb gun.

When it comes to performance or firepower, bb gun takes the lead here but that doesn’t mean that airsoft rifles can’t be powerful; usually airsoft rifles shoot at 300 – 500 feet per second (FPS) velocity but there are guns that can shoot at around 600 or even up to 700 FPS.

Actually the plastic pellets are bigger in size and lighter in weight as compared to the smaller size and heavier weight of steel or lead bbs used by air guns.

That’s why airsoft guns cause less injury to humans while bb guns are potentially deadly and are quite effective regarding pest control.

If plastic and steel bbs are being fired from the same gun, then the steel bbs would travel at a velocity of around 20 FPS greater than that of plastic bb (ball bearing).

Both the good quality airsoft and bb guns would hit the target accurately but bb guns tend to be more accurate in this regard; Why? Because it uses small but heavy steel or lead pellets and its travel is not much affected by the wind.

While the lighter plastic pellets of normal airsoft guns are usually more susceptible to air. However, the airsoft guns feature a hop-up system. A hop-up, if configured correctly, significantly improves the accuracy of an airsoft weapon. But tuning up hop-up is not always a piece of cake, though you can lock it after successful configuration and it will stay that way.

So how a hop-up system does help?  It puts a spin on the bb so it can travel farther and in a straight line

The prices of airsoft vs bb guns greatly vary; you can find an airsoft rifle for as low as $30 but if you want a sophisticated type of gun then it may range up to $2000 or even more. However, you can obtain a pretty good airsoft rifle in a decent budget if you do proper research, read my post if you are interested in affordable but best quality airsoft snipers.

And the same goes for air guns; you can buy it for as cheap as $13 at your local sports store, and as expensive as $3000 from special dealers or online.

And there’s not much difference in the prices of plastic vs steel pellets. However, the steel/lead ones are slightly cheaper.

When it comes to legality, both types are allowed to use in most part of the world except with some terms and conditions like keeping an orange tip over an airsoft barrel’s end.

There are some restrictions on kids’ use which vary from state to state. You can read the detail about airsoft here.

If you have to choose between a bb and airsoft gun to keep your backyard clear of small critters who messes up your property, the bb gun is your way to go as those small steel made pellets penetrate more. It will put those little things out of its misery faster.

Some critters like squirrels who usually don’t stay still, you can use an automatic airsoft gun such as Drozd; its customized version can pump out 1200 rounds per minute with around 800 FPS.

The environments where you can shoot airsoft and bb guns are very different. Airsoft guns are safe to go at war against your friends almost anywhere after making sure that proper safety gear is worn.

But BB guns? Hell no, they are far dangerous to shoot at humans and you can easily end up in your local hospital’s emergency room.

Additionally, the FPS should also be limited on your airsoft guns if you are using it for indoor shooting or in close battles.

Environmental Impact difference between airsoft vs bb gun depends upon the type of ammunition they use, which would probably be left behind once fired.

BB pellets which are made of steel or lead are not environmental friendly at all, they aren’t biodegradable and would stay where it lands. It may also cause more damage to natural objects such as trees.

On the other hand, plastic BBs could be biodegradable making it environment friendly. Not all of them are biodegradable but you can buy specific ones at a little increased price.

This argument of airsoft vs bb guns would continue, both have their own uses. Whatever you use make sure to proceed with proper safety guidelines. Airsoft guns are safer than bb guns that’s why it is mostly used for sporting purposes as well as training.

While the bb guns could also be used for target practice, killing varmints, and small to large game hunting.

Did we miss anything on “bb gun vs airsoft”? Let us know in the comments

A Navy Seal veteran who has served multiple international tours to Somalia, Iraq, Syria, and Afghanistan. He is also an airsoft enthusiast who enjoys playing, sharing his knowledge and expertise of the vast airsoft realm.